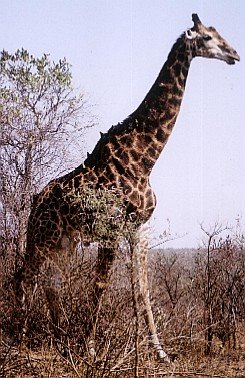 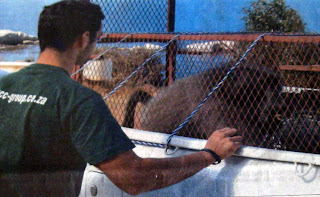 (Photograph: The last hour of Fred the Alpha mail of the troupe - Cape Town)

Another baboon died by the wisdom of the baboon caretaker squad in Cape Town, last week.
Even though this is happening during an election year and in a DA ruled province, Helen Zille is still the only politician who spoke out about the lack of attention the animals in nature are receiving from our conservation efforts. We will sacrifice their shelter, habitat and food source, to further for our emotional, indiscriminate fynbos recovery efforts.

We all know that the fynbos is being threatened with extinction and needs preservation, but so are many of our animal and insect species who were forced to seek shelter and habitat in an alien environment.

So if you love animals and nature the DA still deserves your vote.
(I am not siding with any party in particular, except for the one that supports the quality of all life, the poor as well as the defenseless. I will also side with the political party that will put his money where his mouth is and not in his/her own pockets)

1 I was just wondering if the conservation training covers animal behavior and psychology. Are they taught how to tune into nature and mentally get into the thought or survival patterns of the habitats that are threatening the perfect vision of co-habitation of animals and plants? Can anyone tell me?
2 What type of student chooses conservation as a career? Is it those who love nature or is it students who do not have the courage to tackle difficult subjects? In the past animals were voiceless victims, but thankfully in today’s society there are many nature lovers who are speaking up for our silent victims and are starting to use the Internet to fight their cause. Soon we will have to train conservation students who are sensitive to the life forms they control.
3 Do the conservation students learn all about laws and botanical names at the beginning of their curriculum, and if they are taught to tune into nature by observing any species, is the training offered at the end of their term? Will some students pass their degree without having had time to build that much needed quality to make holistic decisions? How many first year students have silently sat in nature and ask themselves the question: “What does this particular area need”, and then listen to their intuition for answers?

The baboon squad should have had the sensitivity and knowledge to come up with better solutions than killing the alpha males, who adopted the survival behavior of low class humans. It is so sad that experts, who have been employed to solve the baboon problem, could come up with no other solution than to kill them.

Whenever baboons evolve and adapt they are exterminated or locked I cages in some zoo. By taking out the alpha male every time, they leave behind the weaker ones to lead the troop (often into trouble). For animals to survive in this unfriendly environment, where people squeeze them out of their habitat, chop their shelter down, burn their food supply and take pot shots at them and commit acts of cruelty to deter them, we need the strong, intelligent ones to survive and guide the troop.


There have been lots of animal experiments done, internationally, on how to change the behavior of animals; they include, naming a few methods:
1 Shock treatment when animals behave unfavorable and reward them when they behave the right way.
2 The use of animal whisperers,
3 High frequency sound waves etc.
4 Booby traps in homes, bins and vehicles and other places of unsocial survival attempts by the baboons.
5 Pepper spraying of baboons that approaches vehicles and homes.
6 Supply food in a space that can also become a tourist attraction and provide the necessary funds to manage the existence of the species.
7 Set up trust funds or other initiatives to employ necessary international expert or humanitarian groups to train our conservationists.
(Sometimes we may need to be a bit cruel, in the beginning, to save the lives and existence of a troop of baboons.)

The nature of wild animals is to live in one area but move onto another more suitable habitat when the area becomes to overpopulated for the available food supply. Because the baboons can no longer split the troop and look for food somewhere else, they adapted by getting additional food by raiding the obstructive human habitat. This is a very clever adaptive behavior pattern.

We can prevent this by also being clever and provide alternative solutions.
With the right survival training, who knows, perhaps they will one day learn how to propagate and grow their own food in their protective habitats?


There is a lot we can experiment with and learn from the behavior of these animals and there is a lot they can learn from us if we use methods other than kill the clever ones.

They need our help and understanding not their execution and eventual extinction.